Growing Thimbleberries – More than a Raspberry 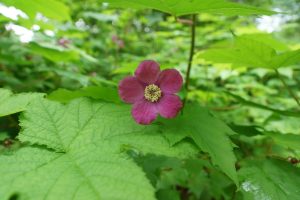 Of all the so called ‘wild plants’ I have grown under cultivation, there was no greater mystery for me than that of the thimbleberry. This species of raspberry like almost all Rubus is highly vigorous, produces a fair amount of flowers and beautiful dark green maple-like leaves. Collecting them on my up north vacations with my daughters was a great joy. Lucky thimbleberries are not thorny. However, when I grew them in my own backyard there was no fruit.  Personally seeing the fruiting acreages growing untended in Michigan’s Upper Peninsula only inspired me to try to figure this out.  I began my “from seed” method trying to solve what might be a pollination issue with closely related clones nearby.  Again, there was no fruit. Here is why:

Thimbleberries are a circumpolar fruit found through Japan and Russia as well as much of North America.  It is home to everywhere.  When I hear the expression “It is native to…” I wince.  But there is one constant: it is not a southern plant. And by southern, I mean anything below mid-Michigan.  Sure it can grow luxuriantly in your backyard in Indiana or Ohio but seeing fruit is a rare occurrence.  Some of my customers have given up on the dreams of fruit with this plant.

A few years later, I met a seed collector that was able to collect seed for me from the Sierra Nevada Mountains in California. These seeds appeared to be more of a blend of thimbleberry and Purple Flowering raspberries. I grew them out for several years and immediately noticed something I had never seen before: fruit.  Luscious, deep red fruit with that crunchy seed texture at the end. Both species have performed well here however the purple flowering thimbleberry (which we sell as pink thimbleberry) has now fruited over 5 years in a row.  To me this is a miracle.  To others, well, it’s just another raspberry.  Hmm, how can I convert them?

For thimbleberry cultivation:  Make sure to keep the older canes. Unlike other raspberries the best yields occur on canes 2-3 years old. Full sun is a good idea as this helps in flower production and flowers equals fruits.  As long as the plants are vigorous there is no need to fertilize them, however anything done to increase flowering will help with yield. We used hardwood sawdust as a mulch.