Drought Tolerant-Honey Dripping from the Tree

This legume species from Western Asia produces a honey like sap called ‘gaz’ that was collected by the Persians during Alexander the Great's era. It was made into a candy called Bandar-i-Shah. 8 inch pods are produced which can be used much like other honeylocusts. No one has considered its use as a sugar tree. It has been fully hardy here in Michigan. The tree is quite vigorous developing thorns on up and down the branches but some trees have very few thorns too.

The yields of the pods and their sugar content may be valuable for both animal and human food and might be kind of a northern substitute of carob or acacia gum. Like all the honeylocust we have planted in our fields, the foliage is browsed on by white tail deer but only the very tips of the branches. The thorns of this tree act as a deterrent to browsing to some extent. Eventually the tree wins out and develops and  a rather thick crown as it winds it way upward. This tree appears to be much smaller than our native honeylocust.  The thick bright green foliage makes it adaptable to drier soils and climates.

No Thorns and Good Pod Production Inermis is one of the sub species that was used in the breeding.. 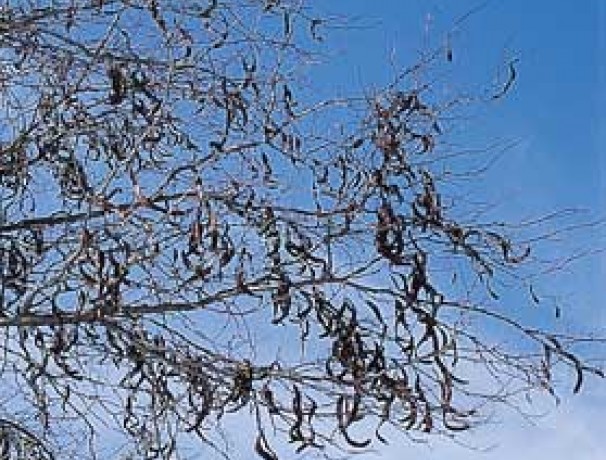 Hershey HoneylocustsThis seed selection of honeylocust combines the high sugar levels along with the..