The American Persimmon is one of the most luscious and sweet fruits containing up to 30% sugar. The astringency or pucker power decreases as the sweetness increases with ripening. This process is helped with warm summers and a warm fall along with frosts. Persimmons will grow in a variety of soils, including clay, sand, dry or wet. Seedling trees tolerate shade and competition from grass or other trees. Trees begin producing at 6-10 years of age.

There are no serious insect or disease problems at least in Michigan. Our Ecos selections are from the most prolific plants on our farm with early ripening and good quality fruit. We harvest seed only from the best plants from our planting of over 300 trees that fruit from this northern location with a short season. Dioecious. Mixed male and female seedlings. The population runs around 50 percent.

Our incredibly short season combined with one of the cloudiest places in the nation make it almost impossible to ripen grafted persimmons in southwestern Michigan. All the northern varieties like early Golden, John Rick, Meader and Campbell 10  are essentially not northern enough as the fruit tastes paste like with a lot of grit to  it. We have tried to grow those and they were either cut down or died on their own graft unions as hardiness was not good enough. However we found the seedlings from these northern varieties were far more successful and produced luscious fruit almost every year.  They just did not test enough seedlings to see what would happen if they grew several hundred at a time. That is what Oikos Tree Crops did starting in the early 1980's. 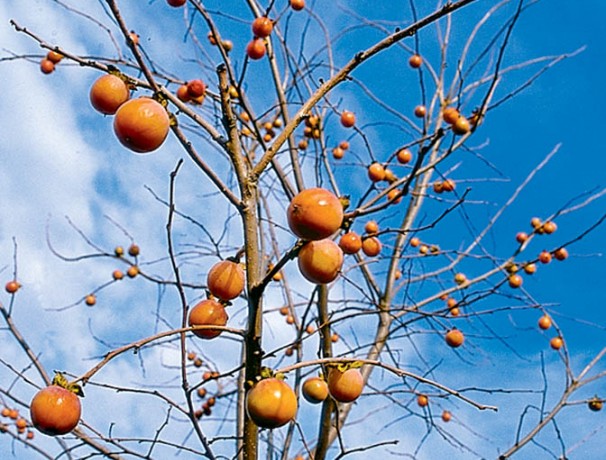 This is the most northern of the seed strains using a mix of seedling persimmons at our farm  s..