Hypernova produces a dense thick spreading root with small elongated tubers.  The whole root system is essentially a tuber because it is more rhizome like it is more like a root compared to other sunchokes. At the end of the rhizome is a small bulbous tuber.   This selection is useful for livestock and deer browse. In some parts of the world selections like this provide a perennial forage crop for aquaculture. It is so easy to reproduce it could also work as a means for land reclamation  for its soil holding properties.  Seeing the wildfires on television makes me think the sunchoke could play a role in its soil holding ability. In the last 30 years we have never seen such a magnificent root system which tends to fan out 360 degrees from the original tuber. Because of the branching root structure this selection can tolerate browse better than others and the root itself contains a very high quantity of nodes ready to jump into action should the top get mowed. The nodes exist all up and down the 'strings' as well as the more normal tuber sprouts.

Flowers are produced  on 8-12 ft. plants. Hypernova may be a selection of a hybrid cross of woodland and sunchoke. These hybrid sunflower selections usually are immune or highly resistant to mildew as well as drought due to their thicker and hairier leaves. There is more seed production with this selection and flowers are produced in greater quantity almost twice that of other sunchokes.

(Ships dormant in spring and fall from Oct. to Nov. and again March to May.) 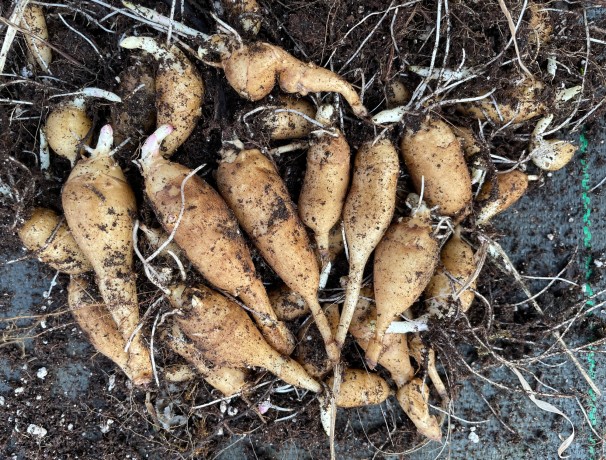 currently unavailable This open pollinated grow out from USDA seed was brought from Russia many year..