Chinese mountain yam is one of the few tubers grown commercially in China and used extensively as a source of starch. Until recently this species was used only as an ornamental in the U.S, for the sweet smelling cinnamon like blossoms and rarely thought of as a delicious tuber.  Mountain yam also produces aerial tubers which grow along the vine. These tubers will reach up to 1/2 inch in size and can be picked and added to soups and stews. If the tubers are left on, they will drop to the ground and either freeze to mush in the winter or grow into a new plant the following spring. The in ground tubers are best harvested in 1-2 years. If you use a weed barrier under the root or a geo-textile grow bag, then it is way more easy to harvest. We recommend this as years of growing it, this is the part few people talk about. "How the heck do you harvest that thing."

They are great stir fried in ghee or sesame oil and are easily digestible. You can also grow them to enormous size reaching 5-10 lbs each but rarely does that happen in Michigan. They generally run around  1-2 lbs. each after 2 years. This species should not to be confused with the poisonous species found in Florida or the indigenous North American species which are not edible and poisonous. Mountain yam does not produce seeds and instead are selected for their culinary uses. These are not the ornamental selections used by the bedding plant industry.  All produce the aerial roots in the second year and onwards. In year three the aerial tubers are quite significant where it could be used as a crop plant to some degree.  If you had to develop a trellis, it would be best to create a more umbrella type trellis or even a dead tree or brush pile as it can grow up to 30 ft. in a single year. .

These tubers are shipped in the dormant seasons from October- November and again in the spring from March through early May. The aerial tubers can be shipped from November through May at any time. Not available international and New York. 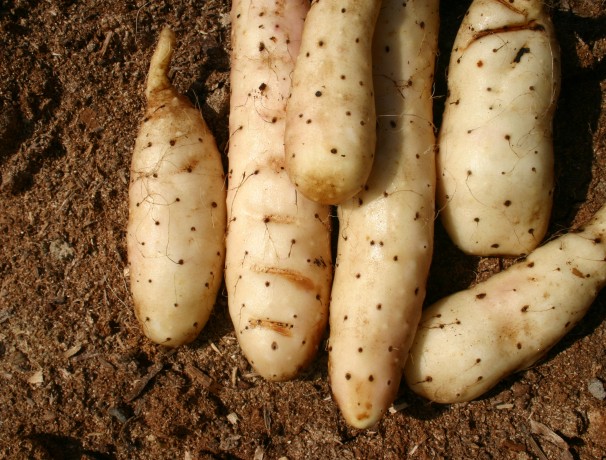