SOLD OUT Since growing the northern pecans from the Northern Nut Growers Association in the early 80's I was able to establish a seedling land race of this magnificent tree using specific seeds from parent trees that ripened their nuts early. The reason for this was my farm is located in an area (western Michigan) known to be in the top ten places for cloudiness in the U.S. Over time other growers sent me pecans from far and wide including Minnesota. Michigan Prolific represents one tree that is both dwarf and heavy producing and is one of the most prolific trees at my farm. It produces annually. The nuts are produced in thick clusters in early to mid October.

This is a good seed strain to develop further cultivars as well as a seedling strain for other cold and short season areas. The fact that the tree produced nuts at a very young age 8-10 years makes it a great precocious source which is very rare in the genus Carya.  Tree tends to be a semi-dwarf and has an open branching habit more open than other pecans I have growing at the farm.

Each packet contains 100 seeds plus two scions for grafting.  The variety is named 'Michigan Prolific'  for the grafted cultivar use. The seed source is the Michigan Prolific Northern Pecan. 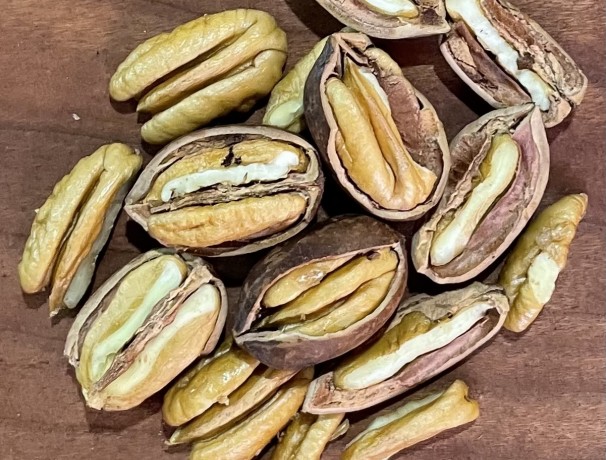