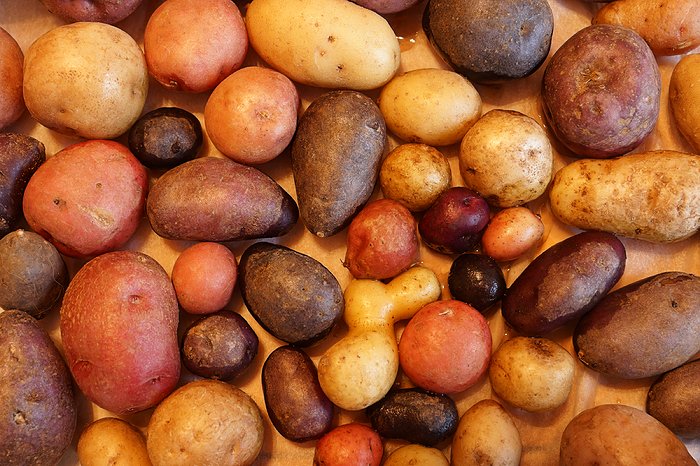 Selected for 'diploidness' or fruitfulness, 'Purple Ease' has produced both high yields of tubers as well as full sets of berries to extract seeds from. As a result you will be able to continue this line of fruitful potato without ever having to purchase seed potatoes again plus grow and sell the Perennial Perpetual Diversity Potato. This package comes with 10 tubers of 'Purple Ease' as seen in the image as well as 2000 seeds which can be used to produce an even greater diversity of potatoes from what is called true seed potatoes. These are the same selection that overwintered for the last decade here at my farm in southwestern Michigan.  They produce mixed colors and shapes. The tubers offered are the latest selection based more on freedom from virus and the blights. Many of the selections are fingerlings which have strong overwintering tendencies within the soil here.

The history of the perennial perpetual potatoe:  Selected over the course of a decade of growing potatoes from seeds, I found by accident that the heirloom blue potato I was growing had set seeds. From there I did a grow out of this seedling line which was planted outdoors unattended to for 5 years or so. This live and let die philosophy was against what I normally do however I had to take a break from my farm at the time to help a family member from out of town so I did not have the time to harvest them during this time. From there I began another grow out patch from those seedlings to produce fruits and seeds only. I had tried other types available on the market as well but they were too disease prone here. Over time blights wiped out many plants quickly and winnowed out the best plants.  For that reason I released  'Purple Ease' in 2021 after 4 consecutive years of grow outs. It has been with me for 6 years and has been a good yielder as well as a constant fruiter with clean foliage that is not stunted by virus problems. It also always sets solid crops of berries in my short season. This year I grew the plants starting in mid June yet they still fruited very nicely with the berries ripening fully. This is roughly an 70-80 day potato.

The true seed philosophy of the potato can allow you to skip the 'viral overload' and start afresh with a new populations. From here you can find your own population adapted to your location as well. That is the purpose of the Perennial Perpetual Diversity potato.  You can create a wild self replicating plant if it remains healthy over time as well as setting fertile fruits and seeds. Since the potato has historically been male infertile now comes a time to change that by having wild potatoes free of the plant breeders who created them in the first place.  Welcome Perennial Perpetual Diversity!  This of course will allow you to develop your own varieties that can be clonally produced too. That is the nature of the potato and the humans that carry them across several continents over the last few thousand years.

To germinate:  Lightly sprinkle seeds on top of the soil or media mix and lightly spray the surface of the soil. Seeds will sprout within one week and continue up to three weeks. If possible for maximum yield start plants one month prior to frost before transplanting outside. Can be direct seeded but needs a fine sandy soil for best results. Treat the seeds like tomato seeds and plant out after frost. Once established try leaving out a portion of the crop to test its winter hardiness. Winter hardy potatoes for us are ones that tend to dry down a little and can freeze without turning to mush. You can also test this by putting them in the freezer but it is not as reliable as the outside. Keep your eyes open on fruitful potatoes and keep the seeds of those as well as the potatoes themselves to continue.

Package comes with 10 tubers of 'Purple Ease' plus 2000 seeds. One from 'Purple Ease' is from the original Perennial Diversity Potato which is  a multicolored mix of all outdoor potatoes. 'Purple Ease' is the highest yielding variety at my farm as well as good for true seed production.

Limited supply of Purple Ease tubers this year but it should you can easily split these tubers into quarters or more to maximize the number of plants for grow out.  Mixed Colored Tubers are the Perennial Perpetual that were grown over the course of a decade outdoors. Currently these are being harvested (September 12, 2022). Only the non viral and clean foliage types are used now for this is the only way to prevent low yields and the damaging effects of the blights and virus load which is difficult to remove without stringent selection process. One group in particular that is looking good is the fingerlings. These tend to be smaller tubers but higher yielding and much easier to container grow in my polyhouses as well. Tubers are shipped in late Winter of 2023 unless you request earlier or fall of 2022.

Available in the fall =October of 2022. Seeds are cold stored. Potato tubers are shipped in early spring in March for most locations. I avoid shipping tubers during ultra freezing weather and take the packages directly to the post office.

Mixed Tubers of Perennial Perpetual Diversity Potato:  Available in early spring, this is the original strain that has been cleaned up of virus by growing in my polyhouses or isolated from other potatoes on my farm. These are now a mix of the most durable selections including many fingerlings which have proven themselves to overwinter outside despite very cold winters. They also can be harvested and stored for spring planting. The 2022 year was a banner for the dark purple fingerlings and these will be the focus this year along with a couple of small to medium round white potatoes that are now over 15 years plus going strong.