This was one of the first trees I planted at my farm in the early 80's. I remember finding one on a bike ride and stopped to talk to the owner. Apparently other people found the large nut size appealing and he would wake up in the morning to see people in his yard bent over collecting the nuts. The large nut size is off the charts compared to all other hickories.  It is considered the largest hickory nut in North America and goes by the name 'King Nut'.

It turns out many hickory enthusiasts made small collections of them going back to the early 1900's where individual trees in the wild were selected based on large nut size and/or productivity. As a result they were grafted and put in an orchard type setting.  l had found a couple of wild trees in Michigan but I also found someone who had a collection with the variety Stephens from Illinois. This large and heavy fruiting selection was a good start for my plantings. I also used some other selections growers found in Illinois where nut size was the priority. These trees took about 20 years to fruit. Luckily I planted them the first year I purchased my land. Eventually I used this strain to further expand them only to find out just how heavy bearing they are. This was one of the best strains of shellbark I have found. Many of the trees show incredible vigor for a hickory tree as well. Many of them are now over 50 ft. tall. When I was growing them for the retail trade I found some individuals that were quite vigorous in the seed beds. Those often got selected out and planted in my small plantings.

The nuts have a thick shell but with a vice type cracker, it is easy to retrieve halves and quarters with most of them. Some have a more convoluted shell and others not so much. Easy to collect and easy to store, it is practical to harvest.

How to germinate the nuts:  The nuts are best stored with some moisture prior to dormancy. They are susceptible to drying which weakens germination. I have the nuts stored to prevent moisture lost. Add a moist media to the seeds mixing them. Then store for 90-120 days at 33 to 38 F temperature. After 120 days remove from refrigeration and put at room temperature. Seeds will sprout up to 2 months but most will sprout within the first month. Avoid breaking off the root as it emerges. The seed will create a new one but it will delay the growth of the top of the tree. 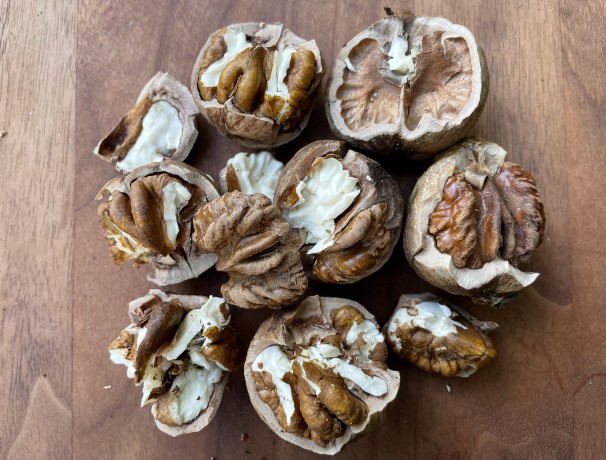 Called the 'Kingnut' hickory because of its large nut size, the shellbark is a well known hickory ye..