Many people worldwide enjoy the mulberry fruit both fresh and dried. Every country has its favorite. Red Mulberry is the indigenous North American species of mulberry found from Texas to Illinois. The fruits from this species are less insipid than most with a bit of  tartness and a less watery flavor compared to the common mulberries often encountered. Our seedlings are grown from wild collected seeds in its range which are considered non hybrid in origin. One inch red ripening to violet fruits ripen in mid-summer. Easy to grow in any soil. Vigorous growth averaging 3-5 ft. per year.  Fruits in 4-5 years from seedling when they reach 6-8 ft. tall.

As far as we know all plants are self fruitful. Having two plants is ideal for better fruit set as there may be some plants that are self infertile. So far all of our plants are productive at our farm with no infertile plants. But are planting is small with only three trees fruiting so far.

Note on hybrids and seed source: Our plants are grown from seed from so called 'pure' red mulberries in Missouri and other midwestern locations where there are sizeable populations. It is possible there are hybrids in our mix.  From what we have seen from growing them to fruition is they all appear to be the red and not hybrids.  A genetic test would easily solve that riddle quite easily if there was also tests on populations that are deemed or should I say christened by the nativist plant gurus as 'pure' however that is defined. Keep in mind there are also native red mulberry cultivars that were found in Texas that also show variation in fruit color and leaf but not because they are hybrids. This is nature and even red mulberries like all seedling fruit show variation. Some information on line is incorrect as well. That in itself is normal for plant identification anyway.  One being using the lobed or not lobed leaves as an indicator of so called ' genetic purity' or another saying the true native ones are either all male or all female trees.

The full tree image in the picture was one I took while in Texas of a 'pure' red mulberry in the front yard of a housing development I was visiting. The developer actually save the tree from the chainsaw. People do not like fruit trees dropping fruit on their nicely manicured lawn especially mulberry which is considered a weedy tree to begin with. Notice the dark bark which is kind of flakey and in strips. No other mulberry has bark like that. 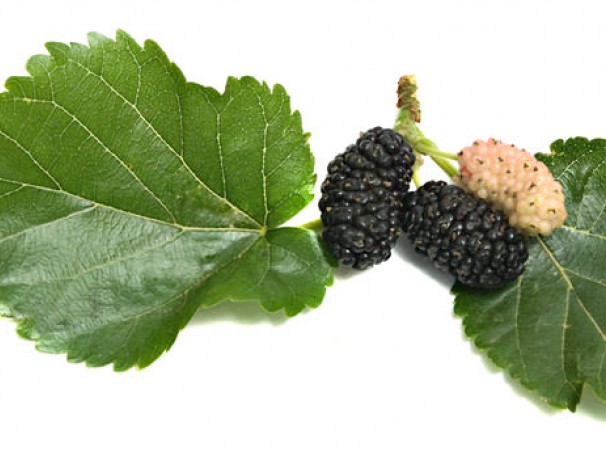 Hardy and Vigorous Selection with Delicious Fruit Fresh or Dried This is one of the fastest growi..