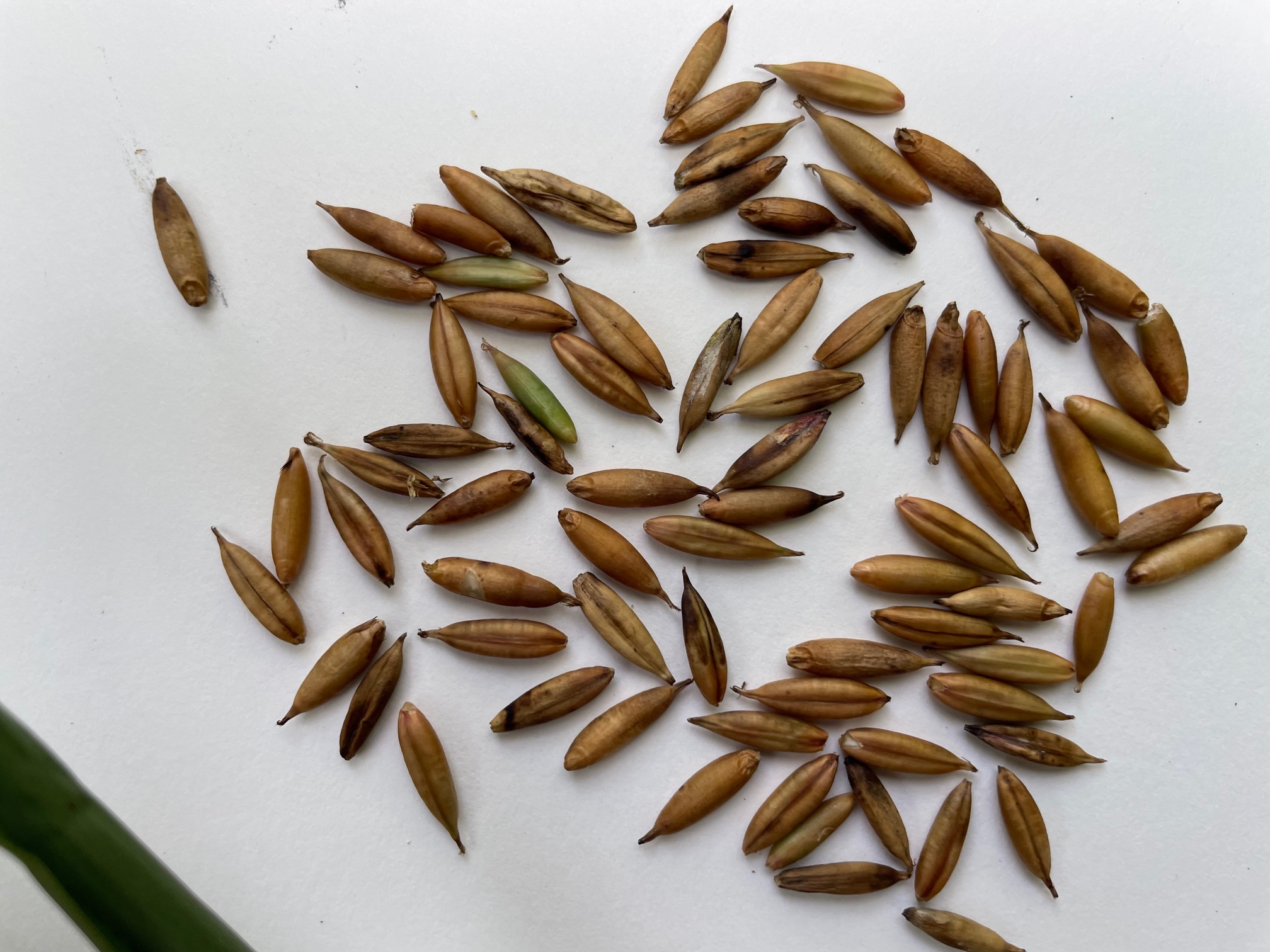 This North American plant is one of a few bamboo species found often along rivers and streams throughout the Midwest and southeastern U.S. When I first started growing it in Michigan, I was surprised at its hardiness. My attempt to grow many other cold hardy bamboo was not successful in a full zone 5 location and I lost a lot of plants grown from seed as well as cloned varieties from other specialized bamboo nurseries. This one not only survived but expanded into a small colony just like its haunts along the Mississippi River. The major difference was that my planting was on a hillside far from water under the part shade of hybrid oaks.

Called 'cane breaks' these thick rather impenetrable grass forests were well known as travelers noted their wide expanse on many of the nations river systems. Buffalo were said to frequent these as  a source of food.  The thick roots form along a central straight as an arrow stolon. The stolons produce dense sprouts along its axis. These sprouts are edible and I always harvest a few every year as kind of reminder of what was once was an amazing expanse of bamboo. It also inspired me to grow bamboo from throughout the world and see if it was possible to hybridize it or use it in the same way trees are grown. Being in Michigan greatly reduced my populations but I seem to be making some head way.

Giant cane has a delicious flavor in the spring. The small white sprouts can be harvested and then stir fried or eaten fresh. A small knife can be used to cut off the sprouts which are next to the main stolon. Although not a mega crop plant, river cane has possibilities both as a conservation plant and as possible fiber and fuel plant. Because it is in the 'runner' bamboo camp, people tend to avoid planting it. Our experience with grow bags has worked for us going on 6 years to stolons were able to penetrate it. The root grew in circles within the bag.

From Seed: Seed needs to be primed and then put through a dormancy to sprout. Planting it as is will normally not make it sprout. Soak in salt water-(1 teaspoon per gallon) for 12 hours. Then pack in a moist paper towel in the refrigerator for 30-60 days. This will unify germination. Put at room temperature. Sprouting will occur over a month.  To preserve bamboo seed, it needs to be removed from the husk immediately and then stored dry in a cool environment. From previous experience, I have found several bamboo species that have immature embryos which means taking them through dormancy requires a period of warmth, cold and warmth again to get the seed to finish developing. In the river cane, it appears some of the seeds are not fully formed. I winnow those out when processing the seed.  They were harvested starting in August of 2021 and kept refrigerated.

Package comes with 20 seeds and 2 bareroot plants dug from my planting. Only one offer in stock for the spring of 2022.

Note: There is some difference on various sources on how to germinate this particular bamboo seed including even mentioning the seed dies if not planted immediately. From what I have noticed the individuals publishing this information have never personally tried growing any bamboo from seed and are taking it from other sources repeating the same mistake. Since I too failed last year to germinate the seed and planted it as is without priming, I will be publishing updated information shortly with a germination percentage and specific details. Because I have grown several thousand bamboo plants from seed, it is not a hard thing to do but careful attention has to be paid to the seeds to see where they are in this process to sprout.

Some seeds of river cane in my planting are not mature always when harvesting even if the seed heads are brown and drying up. Some are in a milk stage and others are not fully developed and look stunted. Most of the shealths surrounding where the seed is suppose to be are empty. I think this has made it difficult for those wishing to seed propagate.  So to be sure I have started a test on these seeds this winter and will write about it after germination. The whole project will take 120 days and was started in early January.