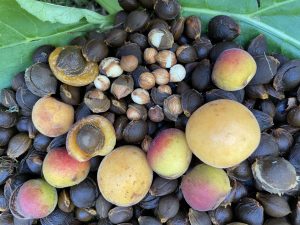 Briana Apricots Harvested this Year from Three Generations of Trees

Mention growing apricots in the north and often you will hear “Not apricots, they flower too early”. But at the same time the question of its possibilities and practicalities arises. The apricot shares a long history with humans as both the seeds and the fruit  create a certain reverence when it comes to delicious tree ripened fruit as well as an edible almond like kernel. The health benefits attached to both the fruit and nut are now well known. Yet to grow them is a bit tricky. In Michigan, rarely are there any commercial apricot plantings. There use to be a variety called Goldcot created in Michigan. But only a perfect location can guarantee a yield of most apricots. I have many of those at my farm too. They rarely fruit.

I was fortunate to grow from seed two plants of Prunus sibirica from an arboretum collection. This particular species is not well known in North American and is considered the hardiest species apricot growing into zone 3.  Now over 40 years later and several generations, that turned out to be a good idea as far as expanding the range of the apricot. Here are a few of my apricot discoveries of the Briana apricot.

Every now and then I think back to when I first planted apricots at my farm. I had this whole plan inspired by Robert Kurle then President of the North American Fruit Explorers to put in an apricot orchard. I did not follow through with that due to the cost of grafted trees and care needed. From that point forward I grew apricot pits found at the grocery store, farm markets here in Michigan as well as the parks in New Mexico. I always think of the expression by comedian Rodney Dangerfield, ‘tough crowd, tough crowd’ as even the idea of apricots was never met with enthusiasm by other growers. When it became apparent that this particular strain was so well adapted to my farm,  I planted many of them on northern and western slopes to delay dormancy a bit to evade the all damaging frost. Sometimes late at night after checking the frost warnings in early spring, I would put up a sort of mental shrine to the apricot blossoms hoping for little damage by frost that night. That was not reliable of course and I soon discovered frost in itself was not always to blame. The amount of pollinators was off the charts. Even in the middle of March, you would see dense clouds of bees and flies around the flowers. Hey, what else flowers at that time anyway? It is so blissful to enjoy the flowers. The yo-yo temperatures were hard to deal with.  Overtime, I soon discovered a no crop meant a massive crop the following year. That is were I am this year in 2022. Slowly but surely my care of the trees has resulted in a consistent yield. Bob Kurle mentioned this to me many years ago. Even in off years, keep the trees healthy.

A tip on fertilizing apricots: Fertilize heavy early in the fruiting season and again in the fall. I found that by using gypsum and pelletized chicken manure, both the return blossom and yield is greatly increased. Believe it or not, apricots are heavy feeders and will respond during fruiting season as the plant increases the mass of its root system. Having fertilizer slowly break down over this period is greatly beneficial. Hence the reason for chicken manure and its insoluble nitrogen and gypsum to aid in the absorption of the nitrogen and other compounds like iron. Small amounts of spray are used on producing our trees-neem, monterey spinosad and pyrethrum. This works to prevent both black spot to form on the fruit as well as stop plum curculio damage.

For spacing use a 20 by 30 or 20 by 20 ft. 109 trees per acre or if hedgerow use a 5-15 spacing between trees.  For pruning try to avoid the narrow crotch angles that can result in split limbs when there is a heavy crop or wind storms.

For seeds of Briana apricot as well as seeds and scions click here. 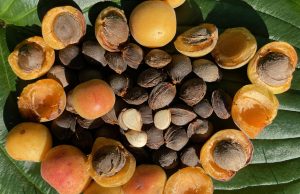 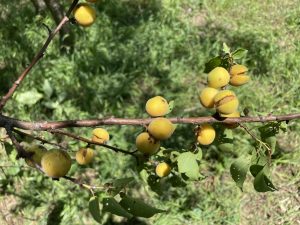 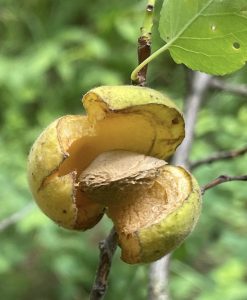