Commercializing the Thimbleberry: The Cultivation of a Wild Plant

The thimbleberry represents one of those plants with a certain mystique around it.  Many people throughout the world know this plant in its northern arboreal habitats as well as in mountainous regions within the United States. It is one of many of circumpolar plants found on many continents. Yet no one cultivates it. Why would you? There are huge areas where they are found wild. I remember hearing about this plant from my brother who with his high school friends took a back packing trip to Isle Royale. This was at a time where they would drop you off at the island and wave good bye. There out of the rock and sand grew vast areas of it surrounded by the pure waters of Lake Superior. There is even a small island nearby called ‘Thimbleberry’ where a yellow one was spotted. Between the fish they caught and the thimbleberries, it sounded magical to me.  It wasn’t until I took my family camping on the Keweenaw peninsula of Michigan’s upper peninsula many years later that I first tasted it. I describe it as an intense raspberry flavor that has been condensed into a concentrate with crunchy small seeds. I gathered enough to put in pancakes for everyone. It was a hit. I took some home to extract the seed for my nursery. This was something ‘dad’ did on every vacation. 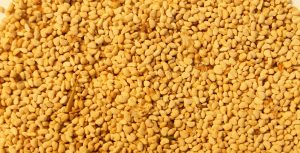 I grew many seedlings of it and soon found it was very easy to flower and grow. However, almost from the beginning it rarely fruited and when it did, there was only a few fruits per plant. Unlike most all the other species raspberries I was growing at the time, this one was extremely low yielding. The plants were lush, flowered nicely yet no fruit was formed.

They even spread and grew into large colonies in my backyard in the shade of the black oaks on the edge of the forest. I soon started finding other individuals in lower Michigan that had the same issues. Some had yanked out plants from their cottages up north and moved them to their homes in lower Michigan. Again there was no or very few fruits even if they had the best of care and multiple seedling sources. This was not a surprise to me. I had tried to grow other super northern fruits and soon found they were latitude sensitive as well as had certain climate related ecological adaptability issues. Did you think the plants overlooking Lake Superior would grow the same as those overlooking your deck? No. Of course not. After several attempts at this, I began to rethink my love of thimbleberries and how best to grow them. I did find a northern colony in northern lower Michigan while running on a trail, but decided not to take a runner or collect fruit. It was a very small colony and likely the effects would have been the same. There was a massive colony near a boat launch too that looked quite healthy. This one was overlooking Lake Huron. 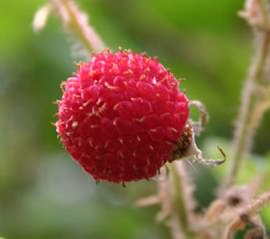 It was at least a decade and soon the thimbleberry fever hit again. It wasn’t the $17.00 dollar a jar jelly that did it though. I realized I needed a wider selection of seed to test. One of these was a couple of Californians that were very good at wild collecting seed. It appeared they were on the cusp of commercializing marijuana growing at the time. They might live in a mansion now!  From their listings, two species were found in the Sierra Nevada mountains at different elevations some of which may exist as swarm hybrids. These are plants which are very similar and naturally cross and create fertile hybrids. These in turn will grow in locations that the other ‘pure’ species may not establish. It is kind of a localized selection done over the course of thousands of years. This area was also noted for its hot summers and longer days much different that Michigan’s upper peninsula. I soon had two colonies produced from these plants under my shellbark hickories. Within five years I had solid colonies of them. This proved successful and now I had thimbleberries. Fruit set. Fish on. 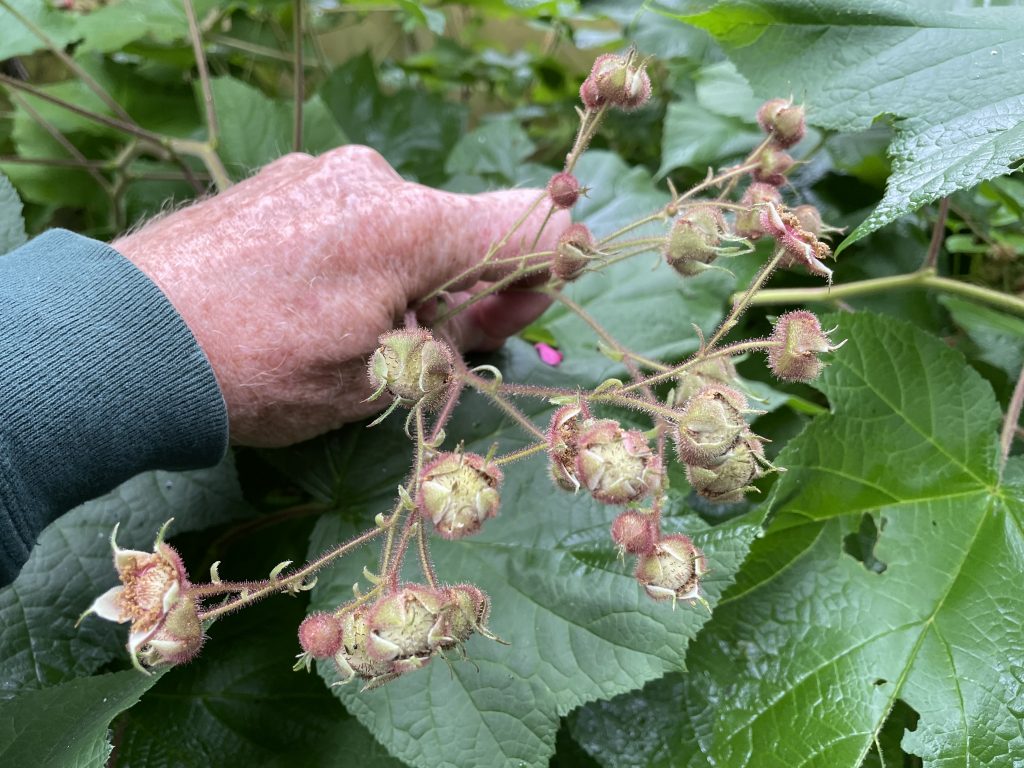 Now what?  It turned out that Driscolls Berry Company was in on my secret. Teeny amounts of plants and seeds were sold to them to a plant breeder who had 24 patents on strawberries. People around the U.S. bought the bulk of them. I shipped out many hundreds and thousands of plants over the course of a decade or more. Yet, there was this empty feelin, oh what a feelin and I got that lovin feelin, that really it was just another novelty fruit from Oikos Tree Crops never to see the light of day in any bigger sense. To this day, I wonder at this holy grail of raspberries.  One customer with a well known business track record told me, “Yeah, too specialized. You will  never make any money from it.”  He was right. 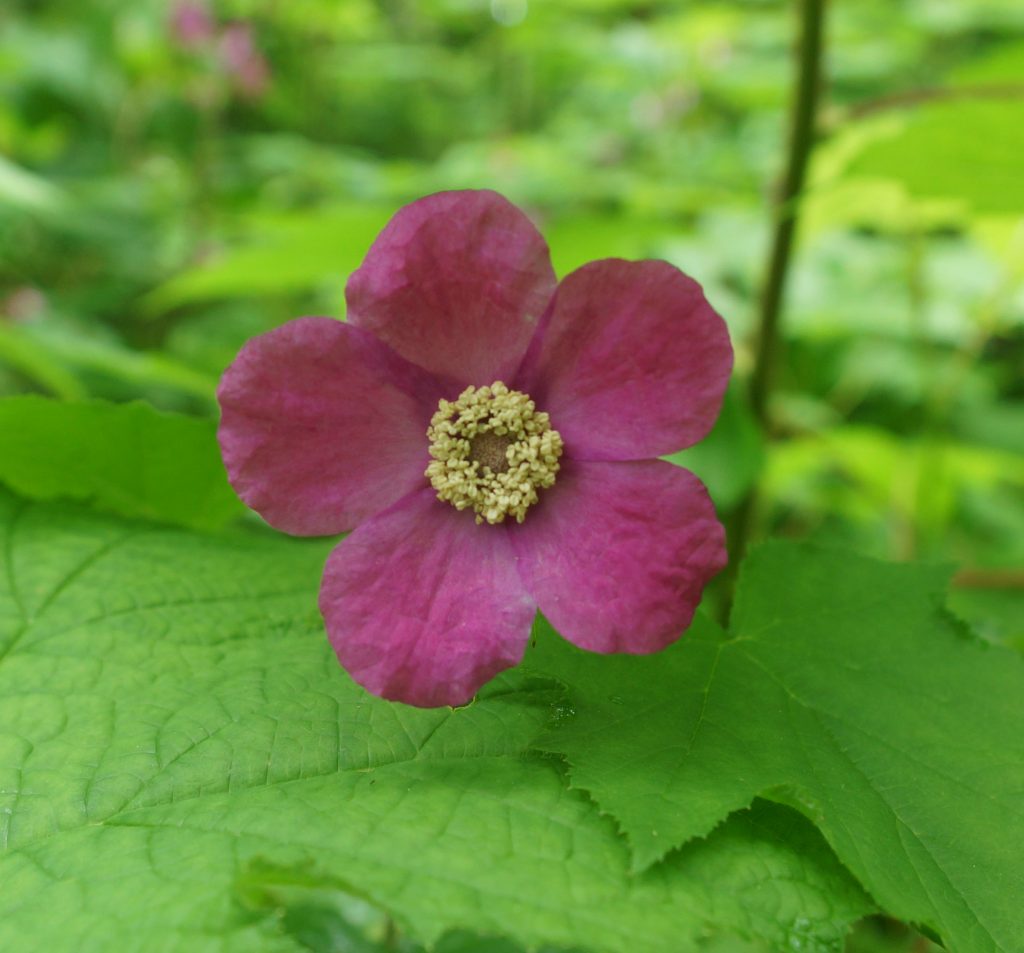 After the hoopla settled down and I made a YouTube video with the help of my daughter Briana. I began to investigate raspberry production as a crop plant. She also did all the delicious creations that you see here.

A few years ago, a well known nursery person who works in commercial fruits and berries told me he was bidding on a new raspberry variety from a well known land grant college for the rights to propagate. He said, “Ken, once it flew past the 10K mark, I tapped out.” (Like a wrestling match.) Keep in mind, this is just for the rights and not the money created by the trademark charged for each plant sold. Everything is highly bred to very specific standards.  Raspberry yields are measured by tens of thousands of quarts per acre. They are sometimes grown in high tunnels. There is one place near my farm that does this for a you pick operation. The ripening period is critical. The watering is critical. Fertilizing and pest management are off the charts. It is quite a labor intensive crop along with pruning. Don’t forget harvesting the highly perishable crop. Super tough for a farmer.  It is one reason you do not see this crop often grown locally. It is also prone to viral infections. Several times my plant inspectors would spot a funky looking leaf on my thimbleberries and send it off for testing. It was always negative but they always had the caveat, ‘it could be a virus, but just not the virus we currently know or we are looking for.’  It turns out virus’s morph into new virus’s. 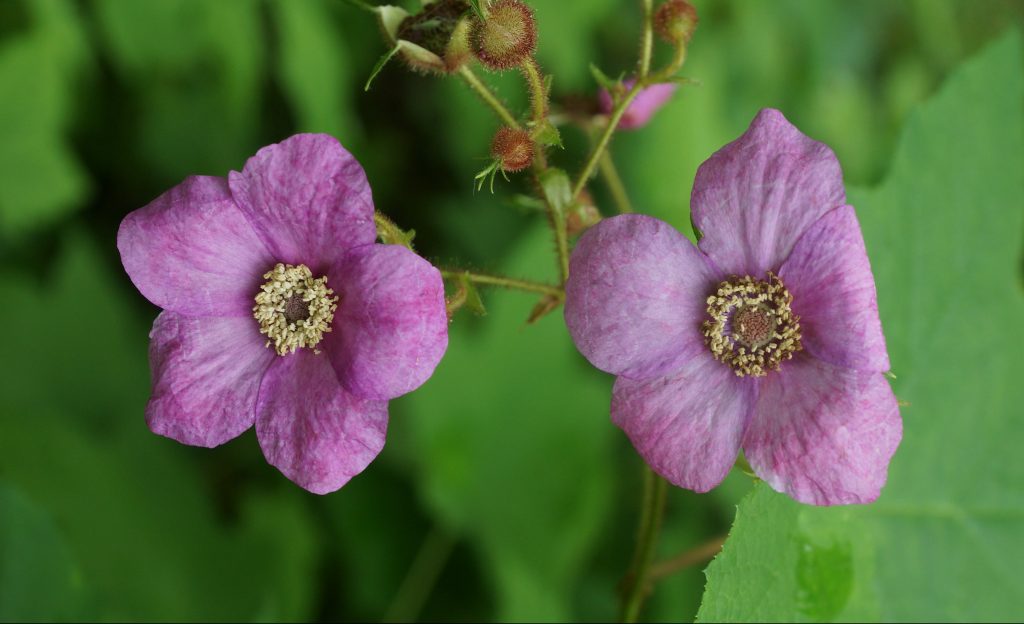 What about thimbleberry yields?  This was hard for me to measure. Yields from my seed selections I could safely say would likely top 20 quarts per acre. If managed on a three year rotation of canes, maybe you could top 100 quarts per acre but that is more of an educated guess with a large dash of creamy optimism sprinkled on top. But if that is the case, that would be a miracle and I would call that a success. The plants are stoloniferous and spread fast soon taking up large areas. This has an advantage in that the canes start bearing at 2 years and continue for 2-3 years and then die out.  So no need to replant. You could say this is certainly usable for landscapes and for commercialization. As far as cost effective or the new macadamia nut level of success, no one knows. Mention it to farmers, and you might as well be talking about time travel using a toaster. 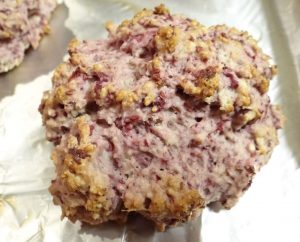 Cultivars:  “Well that might be your problem. Its not what you want, its what your customers want.” paraphrasing from the movie, Joe Dirt.  Once a customer told me about a popular variety of fruit, “It isn’t any better than the others, it is named only to honor the originator. It makes you wonder why they named it anyway.”  Answer: Ego and immortality.  Besides money, very popular these days. All of the seedlings I grew were essentially very good plants with no apparent difference in yields. It is possible with time, you could find higher yielding plants with greater yields per plant. There just is not a lot of variation compared to normal cultivated fruit crops. I did not see it. That is not bad though. You can harness that as a population without loss.  I have found a series of plants like this with significant lateral branching including the American hazelnut and American cranberrybush. These end up as the same plant but are usually more dwarf with super yields compared to their uncultivated brothers and sisters. They are twiggy with lots of side branching apparent even if you grow them from seed. It appears it is a shared trait on a population level and not just a needle in a haystack breeding so loved by actual real plant breeders.  Sometimes the yields are too high and the plant goes into biennial bearing. So not everything is clear on selections in this case.  Thimbleberry is diverse. In Shrubs of Michigan, Cecil Billington writes “is extremely variable. This has led to a great deal of ‘splitting,’ and there are are something like three dozen varieties and forms now described and published.” 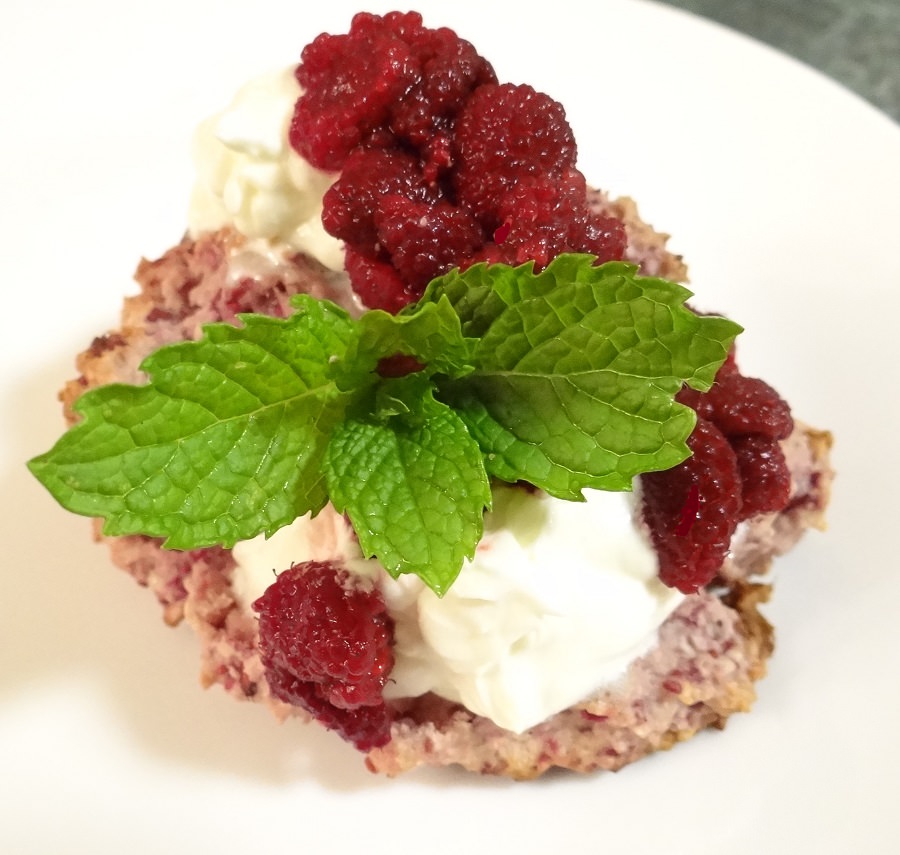 Raspberries are essentially meant to be short lived. They are such powerful pioneer species and highly effective at growing quickly at places where few plants can grow. Even the ones people dislike as invasive are wonderful plants feeding birds and people alike. Once on the way home from Washington D.C. visit, I stopped at a rest area heavily populated by people picking wineberries.  How could anyone enjoy this horrible invasive plant labeled by invasion biologists? Easy. It tastes delicious and makes the clearest most beautiful jelly and a fine wine. You need some wineberry wine pseudo-scientists. Relax. People are using a valuable resource. 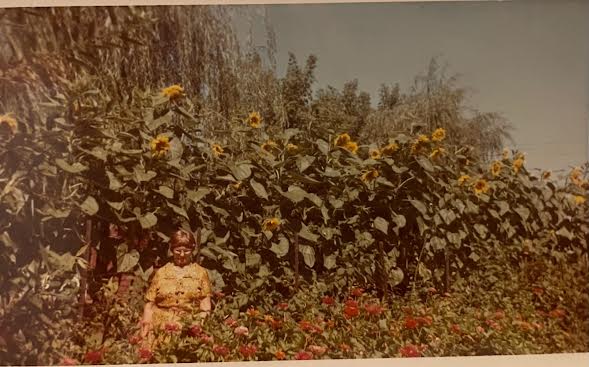 Every now and then I think of my grandmother and her love of red raspberries. She had a long of row of them planted in her garden right next to the giant sunflowers. The rich dark red jam was amazing in flavor. That I remember! Sometimes while picking raspberries at my farm, I hear her high and clear German voice, “Kenny, would you like some RASSPPberries? You need some rasspberries Kenny!”  I sometimes repeat this over and over very loud when I am picking. “Rassppberries, KENNY?” just to see if I can get an echo. You can’t say no.