Dude, what happened to your corn? 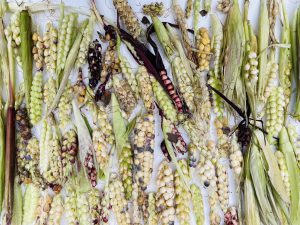 It all started with jury duty. In this case, it was purgatory with magazines. The waiting room was stacked with magazines as it was the era before cell phones.  A Smithsonian article on corn and its possible origins caught my attention. I dove in. Apparently a scientist discovered a species of grass unrelated to corn or teosinte that could easily be hybridized to create the cob type characteristic that we know today and not the normal two row teosinte cob. This created quite a stir in the corn community. I know it seems shocking doesn’t it. It was the third species theory first proposed in 1912.  She did get a patent for her crosses.  Her thought was that environmental circumstances such as a nearby volcano created the corn we grow today by delaying pollination of this grass. This caused the flowering to overlap with nearby teosinte. It was the beginning of the kernel and cob we know today.  I found this article refreshing. And not because I was in jury duty. (I was rejected anyway.)  I began to think of the world of plants and their genetic expressions as more of a continuum or quantum and less Linnaeus or linear. 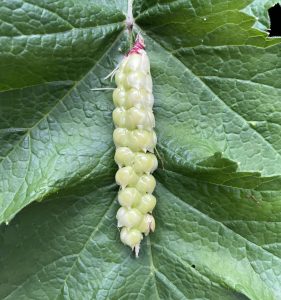 Fifteen years go by. A small packet arrives from an unknown botanical collection. On it is written in blue pen: Zea mays var. mexicana. The packet looses it way to bottom of my sweater storage seed bin. Finally inspiration arrives from a seed selection of a South American corn called Purple Peruvian or Morado .  It is the corn used to make a delicious beverage. Why not hybridize them? When October hit, Morado corn starts to flower and I realize I grossly underestimated the power of this 15 ft. tall giant corn corn sitting next to my 2 ft. tall teosinte corn which had flowered in July. I have no personal volcano.  Is it innocence or ignorance that helps me discover new things?  I digress.   Another decade goes by and I begin to grow teosinte again. This time as more of a curiosity as a potential grain and cover crop. I was pleasantly surprised how quickly the birds loved this grass and I had to move the plants indoors to finish ripening and harvest. It was like they knew this grass and were very happy to find it.  I was surprised at the yields of the small grains tightly woven into the husk. One plant produced over 70 ears. “Ear” is more like a stem with two rows of seeds surrounded by many layers of shucks.  I finally did a little research and found that teosinte pops very nicely and popped some. It was delicious. Thank you Nobel Prize winning scientists George Beadle and Barbara McClintok. This explains its usage nine thousand years ago.   Since I grew no other corn and there were no corn fields nearby for at least a mile, I had a chance to isolate it and grow just from my own seed selections. In the meantime, I received some of the first blue colored sweet corn. It was short season compared to Morado. I will use this. 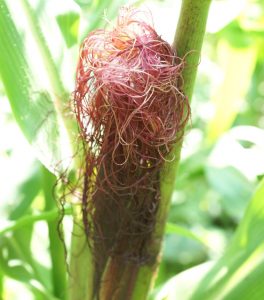 It was sunny and calm day in July and my daughter came to visit the farm and together we sprinkled the pollen. Unbeknownst  to me the night before the racoons had recognized the sweet corn in the patch and crushed the plants. Only one remained but the stem and tassels were not broken. We sprinkled the pollen from sweet corn tassels onto the newly emerging teosinte ears-silk. The teosinte was then harvested in the fall and planted in the following spring with no other corn or teosinte nearby.  As the plants matured it was very obvious of the success of our efforts as some plants were purple in color. None of the plants really looked like corn anymore. The kernels developed into the sweet corn crinkly seeds and popcorn types of all colors could be found ALL ON THE SAME EAR. This was a complete success as now I had a population of plants each radically different than the other. In other words, I had a diverse  population with almost zero boundaries of expression.  In the meantime, I did a little research and this is what I found. 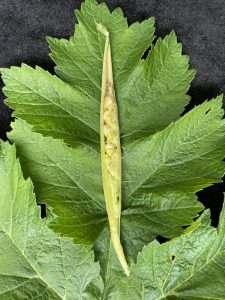 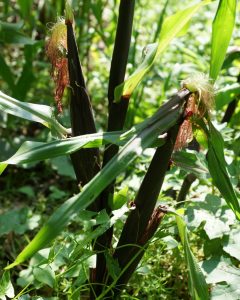 The chances for a cross of this type to take place is roughly 1 in 500. Various types of crosses are done in controlled laboratory conditions and the statistics are generated for genetic research.  I joined an on line class with the USDA scientists discussing corn prior to 5000 years ago. They took my question!! My question was what about the use of Zea mays var. mexicana. The answer was it should never be used and only remain in this small region of Mexico where it is native and should never be grown outside its native range.  Hmm. Several other articles discuss the ‘threat’ to corn of wild teosinte. With 390 million acres within the U.S. alone corn is not something to mess with in a way that is not in line with all the other heavy metal scientists who control its destiny. Only 5 percent of all corn grown is used directly for human consumption.  In general, I would say everyone I met had strong opinions about corn and had it ‘figured out’ as one grower told me. Flexible thinking was only used to further the previous objectives of earlier breeders. Others viewed my experiment as a mistake that should be corrected with directions on how to fix it. Hmm. I see a trend. 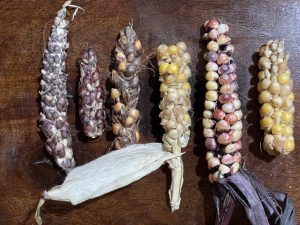 What good can from this?  I can see my crop is not uniform. The yields are super low. It has no use that I am aware of. It would take an eternity to process even if you decided to harvest it. It has no practical use although I suppose you could invent one. Only a few people ‘in the know’ who I reluctantly shared my story with treated it like a flop. My final conclusions: I am definitely on to something great. This is completely spectacular.  It is perfect as it is. This is exactly how nature unfolds it potentialities in the absence of human intervention. Now I think in terms of nutrition per acre. I think in terms of water per bushel and no fertilizer. I think in the way a wild grass would grow untended with a potential to self seed. I think of a delicious and nutritious grain crop unlike anything available today. You are amaizing corn breeders and scientists with your huge intellects. I respect you. But if corn could breed you I think it would add some John Coltrane and a couple of Frank Zappa genes to you. The Yellow Shark? Back cross to Miles Davis. Thinking out loud. Sun Ra? Too much.

Every now and then late at night, I think about my corn hunkered down on the edge of my yellow buckeyes.  Once racoons had discovered the planting and you could see where they dove into the patch thinking a delicious treat was to be found. The racoons still nail a few plants every year because they smell the delicious sweet corn aroma of some of the teosinte plants. You could see where they bite into a few ears and then bail. The corn is just lying on the ground flattened and cast aside with a couple of bite marks in one ear. Some day I will meet that racoon to thank him for what he has done. He will look at me out of the corner of his eye and say, “Dude, what happened to your corn?”

Think of me as grass. Mineral accumulator. Dense nutrient supplier.

Feed the animals. Feed the humans. Not what you want? I will change for you. Self regeneration through cross pollination. Through self distribution with maximum contribution. All will be touched by me. All will benefit.

I have a long memory spanning generations. I will be remembered. You will never forget. If you chisel my image in a stone temple or within your electrical circuitry on a nano scale, time is always on my side as I am essentially and ultimately just one light in a sea of lights, infinitely manifesting over time.

You are part of me and I am part of you. We share the same world. Need something from my world?  I can make that happen. Just add light and water and put me in my soil domain. From the silence in my unified seed state, I come forth. We meet again. 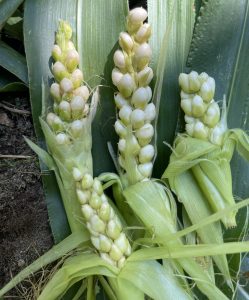