The Groundnut-Weed, Protein and Global in Nature 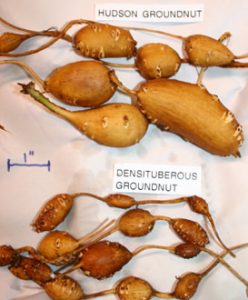 When I first started growing groundnuts over 20 years ago, I had little information on how to produce the plant or use it. It was an edible wild plant I use to read about in high school. I remember ordering the tubers from  J.L. Hudson Seedsman and putting them in these long narrow paper pots. When I checked back in the fall there were no tubers in the pots. They had disappeared completely and found residence at the bottom of the tray where they swirled around in great profusion. I also met a number of people that knew of early ripening selections and sent me  seeds and tubers of wild populations that had very good yields. One of these was Densituberous which was a U.K. selection. As my collection increased I exchanged seeds and tubers to create a long line of very interesting selections and seedlings. Once we had a big “fry off” combining the groundnuts with Chinese yam and Jerusalem artichokes. All my employees loved it.  It was delicious.  At one point I had figured out how to root cuttings from the vine as well.  This spring I removed the entire collection and plan to move it again in the spring of 2022. After sending out thousands of packets of tubers over the years, I still wonder how people are using them. Here are a few thoughts and discoveries of the groundnut. 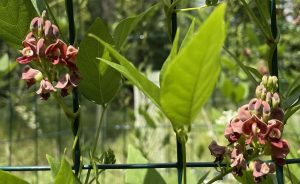 Some of the best data on yield relates to the cranberry fields on the east coast and how to destroy the groundnut. This research supports the use of herbicides to rid the tubers once and for all from the fields. Because of the tenacious long runners, groundnuts grow in great profusion in disturbed river banks or edges of ponds and streams. It is also nitrogen fixing and does produce nodules. I have seen this on many of the roots after 5 years of age but not all. My point is this. If its defined as ‘weedy’ then that in itself is a call to action to make it a new crop plant. We need more weediness in our crop plants. They need to be more vigorous and healthy and not ‘dumbed down’ in cute compacta type plants, the current trend in the nursery and floral industry. Breeders of all sizes support the dumb down as this is what sells as well.  To me the groundnut would be nice to produce a lot of seeds as well as this could produce a secondary crop as well. If someone says weed or invasive, jump on it. That plant has potential!  This is what we as humans need as well as for the earth for health’s sake. In my preliminary measurements, the yields of one of my selections is roughly the same or more than soybeans per acre.  It definitely is the perfect weed.  I think more research should be done on this and I hope to have more real life farming applications done.

Groundnuts have a shallow root system that skips along the ground. They can literally be found on the surface of the soil sometimes. They grow the opposite of sunchokes.  For years, I tried to grow them in grow bags. This turned out to be a bad idea. The yields were greatly reduced every time I tried this method. It did not matter the size of the grow bag. However I did like the idea of containing the planting for harvest, shipping and packing reasons for the nursery. So with that knowledge in mind, I created small raised beds 10 ft. square with a bottom layer of Dewitt Weed barrier underneath. I then filled up the planting area with 6 inches or more of an organic soil media I had made using Espoma holly tone, chicken manure and gypsum. These amendments were added to a standard Canadian peat moss and perlite mix. The groundnuts were then planted about one inch deep into this mix. Wow did they run! The groundnut needs to stretch out and run like Forrest Gump. Run Forrest Run. You will still need regular irrigation with this method. You will see the difference.  Some of the runners will grow up to 10 ft. in a single season. The more runners, the more nuts on the strings. The more nuts the higher yields. 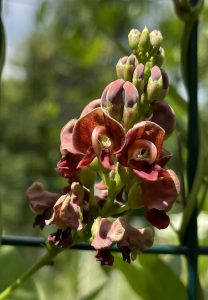 The world needs new sources of protein preferably easy to produce and plant based.  Ole Modern Day agricultural has dug out of its closet the soybean again as well as pea isolates and various other fungus trying to convince the world that these are vegan friendly, earth friendly or something else friendly so you can cozy up to them in the supermarket. Apparently there is very little regulation on these products and the labeling of them. Groundnuts prevent a massive challenge as there are no processing facilities to handle them. There is no means of someone growing them and no harvesters either. For now they are a cult classic grown in small amounts by some farm to table restaurants.  They might be on the menu as native and combined with wild rice or ramps.  Check please. Nice but inaccessible to the average person and not likely at the places most of us eat. 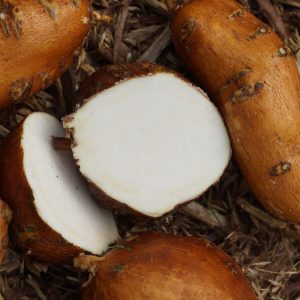 Groundnuts have been around the world several times. Since the use of an alternate tuber source other than potatoes, the groundnut has been attempted in almost every country on earth. What happened? Potatoes are way easier to grow, use and store.  At one point, groundnuts ended up in Ireland after the potato famine. Japan and Korea have plantings of it and use it. I believe this plant should be widely distributed and used by all cultures as a healthy protein source as its durability increases with plant selection. Let me tell you a story: One of my customers took the Clusternut groundnut I selected and planted it in an area of what would be considered the opposite of all groundnut soils in southern Texas. The climate and soils are very hot and dry with little organic matter. He came back to find that an armadillo had destroyed the vine but it had since regrew and looked entirely healthy and vigorous growing over 5 ft. in a few weeks.   Lets make the groundnut a living technology we must share.

New Names For a New Crop:

For a while people suggested to me new names for this crop. The idea was not to have it associated with the peanut. At first someone suggested Apios. This is the genus name. I think translated it means handsome Icelandic gentleman. It was Latin. Not many people use the word groundnut to describe peanut but of course it is still used in some countries. Recipe books often have groundnut stew in it. But when you read about the global use of peanuts there is no parenthesis followed by groundnut next to the name. It’s the peanut. Peanut is universally accepted and groundnut is regionally accepted. Both are used to describe the peanut.

Another idea is the word hopniss.  From what I know of it, it has no connection or is even a descriptive adjective to the plant itself. Want to deep six a good fruit, nut or tuber? Give it a bad name like hopniss.  Groundnuts were used by at least 12 different tribes throughout North America. Depending on the location of the plant, the name would likely be different depending on the language spoken. If the name hopniss “sounds like” a certain name in English then that should be discontinued entirely as that is a misinterpretation. But, hey why am I complaining? What’s in a name? Apparently everything . A quick look at the names of fruits and vegetables today and you will see what I mean. Groundnut. Its like finding a nut that grows in the ground.

Want to join me in my groundnut evolution revolution? I am still making groundnuts available for public plantings, community gardens, permaculture public gatherings  and other culinary uses . Lets elevate the groundnut for all cultures to use and enjoy greater health.  It is indigenous to North America but lets expand its range into the menus of the world. My efforts to make it available to other nurseries was not successful. Even giving them away they did not want them. This shows the uphill battle for others to accept and grow new food plants. It seems to be stuck in the cult classics of gardeners. That is fine but how many times do I have to listen to my ‘Softmachine’ LP’s if you know what I mean.