When I first began raising nursery stock in 1980 I really wanted to use organic methods both for soil improvement and for insect and disease control. At that time, the methods, chemicals and technology made it more difficult to fulfill these ideals. I stuck with it, did research and through trial and error created what I believed was a safer work environment with a cost close to conventional.  Here a few of the most effective organic controls we use at the farm.

The soil mixes created for the gardening industry were generally not good for our use. Most commercial mixes were too weak for hardwood, fruit and nut plants. The fertilizers within them wore out quickly.  In earlier times, we corrected this weakness with fish emulsion. Now we use the Fertrell Super N and Espoma Holly Tone fertilizers along with gypsum within the mix and have it blended for us with the help of a manufacturer. Our foliar is now Natures Source 3-1-1  and biomin iron which is made from soybeans.

I think no one has tried more organic controls than me. Here are a few of the least expensive and most effective organic insect controls that work on a wide variety of pests.

Monterey Garden Insect Spray is highly effective. Compared to our old mixes of rotenone, pyrethrum or the dormant oils, this spray has greatly reduced pests while allowing us to enter our greenhouses the same day without fear of toxicity.  This insecticide is made from the bacteria found in crushed sugar cane. Supposedly it was found in an old rum plant. The isolates derived from the bacteria show a high degree of safety for humans.  Pyrethrum became too expensive and rotenone for agriculture is rarely available in powder form anymore. We still use a knockdown insecticide called PyGanic pyrethrum which is great as a quick-acting botanical insecticide made from a daisy.  It is useful for instant results. It does not mix well with liquid fertilizers.

For a while we used massive amounts of Neem. Neem did work but you have to be careful not to apply it when temperatures are above 90 F which is tough in a polyhouse in the summer. The form we use now is called AzaGuard. It is highly concentrated and very effective compared to the others. It acts both as a repellant and control. Expensive,  but it works as an antibacterial, antifungal and antiviral.

One of the most frequently asked questions we get is how to prevent browsing from white tailed deer.  We have whizzed up numerous concoctions of garlic, onion, fish emulsion and mint oil. These mixes were unpredictable in their results. It was effective in good years with a lower deer population. But the best results came from a product called Deer Stopper. It is made from putrescent eggs, mint and rosemary oil. These sprays have to be applied very regularly and always after rain. The idea of any repellent is that of prevention.  An animal’s natural instinct to consume your plants and discontinue foraging is a big request. For that reason, in a year with a healthy population, I considered my sprays the Tabasco of the deer repellent formulas.  By the way, I tried that too.  Not only was it not effective, but the vinegar was toxic to the plants.

Where to Get Most of the Products Listed Above:

Other Pesticides-Peaceful Valley, Farm and Garden Supply and Arbico Organics 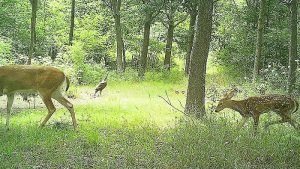