The American Persimmon in Michigan 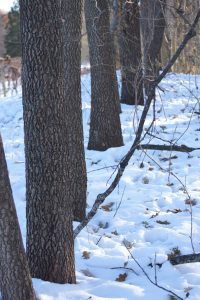 When I first heard of the American Persimmon I had just graduated from college with an interest in starting  a fruit farm with my brother in southwestern Michigan. I had a small  landscape maintenance company trying to develop the concept of edible landscapes. In the winter I would work by pruning the apple orchards in the area. While I was researching different fruits to grow I kept finding references to persimmon as a minor ‘no spray’ fruit within the journals of the North American Fruit Explorers Association. People would write lavish articles about this fruit and its many cultivars describing them as date like with a creamy texture worthy of being called ‘fruit of the gods’ which is translated from the genus name Diospyros. The authors were much like art or wine critics today and could tell you exactly what they were experiencing and why you should listen to them. Others might say, “its a good one” and leave it at that.  Like many I had assumed it was a southern fruit and would not likely grow in Michigan. I would purchase the Kaki persimmons at the grocery store hoping for salvation. Nothing happened. As time went on and I began to meet other fruit growers in Michigan, someone brought some American persimmon fruit to a meeting. There they sat on a paper plate looking a bit worn out, sweating with a serious cloud of fruit flies hoovering above.  The flavor to me was incredibly bland much like week old oatmeal and the texture of a fine 220 sand paper with a hint of wood. (I learned to write like that from the persimmon critics.) Well it turns out as a tree the persimmon is an easy tree to grow in Michigan, but the ripening of the fruit on the tree was another matter.  One of the members from Saginaw told me he ‘finishes’ them on a radiant hot water heater.   He mentioned to me rather bluntly, ‘lets face it, this is not a practical fruit.’ Persimmons apparently were a tree people could grow but maybe fruit quality was not good because of the short season. When I use to go ‘jogging or yogging’ I would run by a tall giant of a male tree on the Kalamazoo College campus. There it stood with a ‘black gum’ tag nailed into it 10 feet up. Tough crowd. Even the persimmon gets no respect.  I remember buying some of the grafted early ripening cultivars like “NC-10” and “Meader” only to find out the hard way that early ripening in one location was not early enough ripening in Michigan.  It was just too cloudy here.  Summers were cool and fall weather came too soon. I was kind of disheartened for a while.  Finally after eating some super delicious ripe persimmons in Iowa, I quickly ramped up my efforts when I got back to Michigan. This fruit was fantastic. It was the date effect I was looking for. I hated to admit it, but those persimmon gurus were right. It was the fruit of the gods.  I have to find a way to make this happen. I was not going to let this idea go puckery like those unripe persimmons. 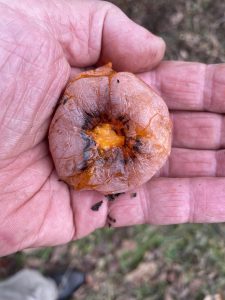 From Seed to Tree

Starting with seeds, I decided to grow thousands of trees of different seed sources from cultivars and interesting wild trees in the northern part of their range.  I would then plant them surrounding my farm as a hedgerow to slow the wind. If it did not work out as a fruit tree, then the ebony type wood might still be of value to some future tree farmer.  I had a total of 2400 running feet of property line that would serve as my row. I spaced the trees 5-10 ft. apart. This would take into account for the male and female ratio of 50 percent as well as give me a shot at finding a tree that would ripen and would be work in my short season cloudy location. I had hopes. I had dreams. I did not tell anyone. The persimmon critics were abundant at this time and there is no spray to get rid of them. Even to mention it, brought only more confusion. I remembered that metal tag buried deep into the bark of that magnificent tree. 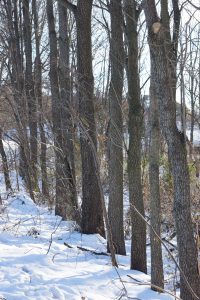 Eventually after the first 3-4 years you could begin to notice the trees peering out of my field of quack grass and dewberry brambles. I used grape pulp from Welch’s as mulch on some of them. I shoveled it by hand into my pick up and hauled it surrounding the small trees. The trees looked promising as they grew with my oaks, walnuts and pecans.  Flowering and fruiting began in 7 years for many of them although some took up to 12 years to fruit. One tree fruited when it was 4 or 5 years old. I was on my way. Soon the whole planting was flowering and fruiting. Much better than the 15 year average the botany books say. Male and female ratio was roughly 50 percent. The honey bees and everything else made a hum you could hear and a cloud you could see every spring. This was a great joy to me to find this and the cocoons of the Prometheus moth in the winter.

After a few years, I visited other cultivated plantings in Illinois including Ralph Kreider, Jr. and James Claypool and discussed with them my plantings in Michigan. Both gave me further encouragement. Ralph was my main seed supplier using selections that were early ripening. I had eaten a lot of persimmons that trip and could really experience what  a tree ripened fruit was like and the variations found within this wonderful species.  I eventually was able to see other persimmon trees in Michigan too. I saw some trees near Traverse City, Allegan, Grand Rapids and Kalamazoo.  By this time I had finished my hedgerow and needed no further seed from outside my farm. Mr. Claypool did share with me a useful selective process for breeding: use plants outside the cultivar level especially Early Golden and find plants outside the native range growing in unsuspecting places. Of course you have to share your findings and your seeds to continue the journey. Don’t be the nursery or plant collectors black hole.

My persimmon journey has taken patience but the trees led the way and I just followed. It is time to say, “It’s more than a southern fruit. Everyone can benefit.” These seeds should be distributed world wide.

Persimmons Into the Future

Update on my persimmon planting: In the past people named persimmons based on their performance in a similar type of climatic zone they are found in naturally.  Michigan represents a challenge to evaluate what is good and what is not so good. So for the last 10-20 years I have kept track of the trees that will work here 100 percent of the time.   I am currently working on bringing the female and a few male cultivars out of my planting within the next year. Roughly 30 new cultivars will be named in 2022 and from there they will be rooted. The plants will be put into a public planting yet to be determined so everyone has access to them as well as making the persimmon a popular fruit in Michigan and other cold and short season areas. The idea is to show the potential of this crop and the ways to grow it using all organic methods removing it from the current herbicide stripped and sprayed orchards that exist today. 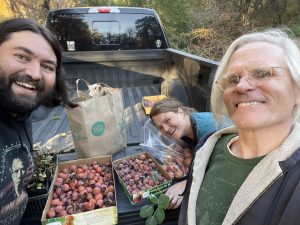 Fantastic Idea Ken: I want to replicate your seedling plantings at my farm.  Order Seeds Now

Sign up for my newsletter which will include various postings on culinary, healthy ideas for growing plants and making life a little more enjoyable in some way. Sign up on the bottom of the page.