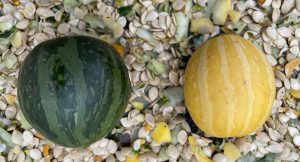 Many years ago right after graduating from college, I began joining organizations and arboreta and played an active role in seed exchange. During that time, I found many like minded individuals that thought the best safety net for plants  is dispersion. I wanted to be the Seed Savers Exchange of woody plants. Without some sort of dispersion and then growing them out under cultivation, a plant could be found at a bottle neck of its existence and evolution. A plant needs to express itself in a real time and place or everything remains dormant just like the seed. I really appreciated the philosophy expounded by the seed company J.L. Hudson Seedsman-PRESERVATION THROUGH DISSEMINATION.   After many of my plants started to flower and fruit at my farm, I began to see the world in a different light. Whether it was Cotoneaster, Syringa or Corylus, the plants began to tell me a story of their past while suggesting a way forward. It was through these small groupings of plants that I had stuck out in an abandoned hay field had gotten together to discuss survival tactics and future possibilities.  At the same time I was doing some good and a few bad things for cultivating the plants too. I was not helping in many ways.  I was still following many of the normal from ‘university’ or book level knowledge.  As time went on I knew these were outdated ideas and no longer needed. They also did not apply to the style of planting I was doing.  I abandoned them quickly. Some of the suggestions I received from others were just too expensive to implement or involved questionable methods. I remember one plan offered to me was to kill off everything in my pasture by using herbicides and then use a type of seeder that would push the seed into the soil and dead grass. The seeds used were species that had a maximum life of 5 years and this would then have to be repeated again. When I asked about the herbicide use, they said it was totally fine and I should ‘get with this program’.  I closed the door quickly. Many new plants were seeding in on their own once the pasture was no longer a pasture and these new plants were the beginning of the conversion from field to forest. Some of the so called weediest plants like star thistle were also the most beneficial. I began to see things in a new light when I started noticing the flora and fauna changes. Now over the last 40 years you can see the improvements to the soil and the animals that live on my farm.  Even though my 13 acre farm was not a typical farm and my plantings were not commercial, no one really cared too much on how I did things.  Even today few people know my farm other than my nursery and in terms of my life long work even fewer. I hope to change that.  However, the plants said otherwise. I quickly adjusted to new techniques that I often found by accident.  Because of my interest in using plants that had never really been grown in Michigan or the United States, I was met with a lot of loss initially. To give you an idea, I had purchased and used all of a thousand metal forestry tags to mark the species and selections I was growing. Eventually, many plants perished or were just short lived species. About 15 years ago, we updated the spread sheet of the plants.  I recovered more than half of those tags and began using them again for new plants. In the meantime, I streamlined my plantings and began reintroducing more diversity generated from other seed sources as well as from my plantings. Some come from my farm-locally and some from far away locations-globally.  Adaptability is a funny thing. It is not sink or swim. It can be more of a swim or tread water! It certainly isn’t regional, local or a needle in a haystack either.  If it was any one of these broken philosophies on their own, we would not be here. That nature does not exist as then it would be a kind of exclusive club.  Nature is integrative and all inclusive.  Here are a few examples of some lessons learned along the road to my tree farm or in todays verbiage ‘sustainable regenerative agroforestry project’.

“Water Percolation” My farm has a very dry soil with low organic matter and a shallow topsoil.  I remember mulching like mad and using all sorts of water gels. This was a failure. Once after a light rain, I went out into my plants and carefully dug around and found out that water does not necessarily go straight down especially with light rains.  After carefully excavating the soil, I discovered that water can go ‘horizontal’ in a plate like fashion especially if the soil was very dry to begin with. I wondered if there was a way to lessen this hydrophobic characteristic to some degree.  I was familiar with the same plating issue with soil mixes where they use wetting agents to solve that. I found  ThermX 70 made from yucca extract which totally solved that problem.  A teaspoon or two in a five gallon pail is enough to water in the seedlings.  This will  break the surface tension of the soil which will the  cause even light rains to penetrate more deeply and thoroughly throughout the soil profile.  It allowed me to plant smaller plants, without rigid plastic tree shelters and do it even in the dead of summer. Huge savings in time, money and plants lost. And thank goodness, no more plastic tree tubes. I switched to netting on species prone to browsing now.  I found that the interns I used to help me with this project also liked the fact that the water hit the surface of the soil and went straight down while removing the inconsistencies in the soil found when you dig a hole and fill it back up again.

“Mulch Volcanoes and Other Violations of Natural Law”   One of my favorite obsessions was getting mulch for out planting. I used everything from sawdust, woodchips and even bagged leaves provided by the neighborhood I lived in. One of most off the chart mulches I found  was grape pulp. Welch’s was close by my farm. The company responsible for off loading the grape pulp after processing was happy to find my interest in that. I had a lot of it. At one point, I hired a contractor with a bulldozer to flatten out the piles of pulp.  For a while the whole farm smelled like wine. The neighbors were not happy when the fruit flies reached nuclear cloud like proportions. It was worse than my love of fish emulsion at the time.  I used grape pulp initially around the trees as well as sawdust and wood chips. Since I did not have a tractor, I shoveled it by hand into the back of my pickup. It was quite a work out.  Although over time, these mulches provided fertilizer for the tree as it matured, it did little or nothing for the seedlings for at least two years. The mulch blocked water flow into and around the tree. If there was an extreme drought, it became even more difficult for the soil to accept water even deep within the subsoil. It was as dry as bone at times. Putting a layer of cardboard, paper bags or landscape fabric was the worst. That was the “dam” that pretty much stopped all water flow. I always wondered how much toxicity there is in cardboard too. I ended up buying paper and used cellulose mats but all of those were short lived solutions The one variety of fabric called Vispore was good as it did not plug up and percolated water to some extent. The ones I made from DeWitt landscape fabric while watching T.V. was very poor and became a dam making water run away from the plant in many cases.  For a while I applied herbicides to the grasses that were luxuriantly growing around my mulched trees. The grasses definitely benefited from the mulch.  All of this came to a crashing halt as the time I had to plant became very limited to weekends and half days here and there while I was running the nursery which was taking longer and longer hours to manage.  It just took too long to plant anything in my fields,  so I had to regroup. Instead, I began to focus on establishment of the tree into its new soil. I was using tree tea bags of various types. The materials in those are iffy and I was not sure they did anything.  I worked on developing Soilicious with its mineral and alfalfa based formula as a means to speed up rooting into the surrounding soil while providing some fertilizer content that would not attract racoons digging. I discontinued all mulch for the most part and now use only a few handfuls of composted pine bark mulch per tree. It worked like a charm. I rarely lost trees in the first year anymore.  I’m not going back. Curse you mulch volcano! Run away cardboard! Well at least I got a good work out.

“Dude, its local.”   Overheard at my farm. Having something produced locally comforts people. Restaurants do it. Everyone is doing it from the heating industry to farming.   Everyone knows what that is. Like the local hardware, I too like it. It sounds good but in reality, for a nursery it is just not true. Plus local is just not better in many ways. Its is not a very good definition of plants in and their origin.  The nursery industry whether a small local place or Lowes is quite different but they share a common thread, the plants they offer may be both global and local.  Like the hardware, the components are made all over.  Selections of plants are developed throughout the world now. To top it off, plants are composed of genetic information that was made long before their arrival on a particular land mass and the continent they currently reside on. The nursery industry like anyone growing plants, captures in time a form that appears adaptable to a local condition. This is a wonderful thing and certainly the dude-its-local guy would agree.  But it does not stop there.  That is a point in time that is captured.  The local is part of a long line of evolutionary history and its always on the move never staying put. That potential of environmental flexibility is very high with all plants and this one thing provides a means to expand its range and change within its ‘local” range if given a chance. This is where you can come in and play an active role. You can give the plant a chance to change. Change is good for plants. Very quickly a human may find something adapted to a location that is not local or outside the local. Maybe this plant has hybridized with a nearby plant. Maybe that nearby plant is not from that region. It becomes complicated for those who love their botany black and white as they implode with their draconian knowledge of plant ranges.  A plant that can be used in cultivation has potential if it changes and can help people live a healthier life.   It’s ‘close enough’ works even if it is thousands of miles apart especially if it can reproduce itself and adapt to local conditions whatever those are or become over time.  Local now means global in origin and native now means exotic. Its a smooth sliding scale from local to global. The plants can move forward in life unimpeded. We struggle to keep up or we adapt and ride this flexibility like a wave. My thought is “surfs up dude”.