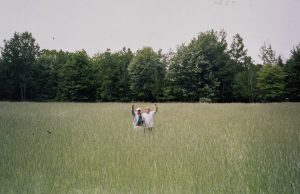 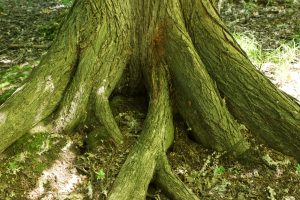 Not too far from this wonderful slippery elm tree on my family’s farm was a great field of rye my father and I created. Like this tree, the rye field idea was latent and was not discovered until later in life. Who knew it was there all along? The field was the last thing we worked on together at the farm. This time though it was not Christmas trees.  I had tried to convince him of other crops including holly and u-pick blueberries, but it was just not to be. On a walk one day around the pond, we came to a rather undramatic conclusion: something new had to be planted there and that something was rye. The field had been cleared for years after the Christmas trees were harvested. The goal was to take out the remaining Christmas trees, till it and then plant massive amounts of rye.  My dad hired a bulldozer person who then removed the trees which helped break up the existing sod. I came to visit on weekends and went to work tilling and then discing. I think even my uncle took a few passes when I was not there. He helped with everything usually. My mother told me that “your father was very excited about the planting and was staying up at night thinking about it”. Who knew? Rye was the catalyst.

Finally fall came and we planted the rye. Because I was unaware of the recommended quantities needed, I over planted. Go heavy I thought.  Unlike planting trees, rye is the Peter Pan of crops where you scatter the seed into the air like magic fairy dust. Then we waited. The first few months in late fall and winter brought in huge amounts of deer which grazed on the lush green grass. It was like the field had been mowed by deer. The deer loved the foliage.  I have never seen so many prints in that area since. They must of thought they hit the hyper-space of foliage because surrounding the land was witch hazel, Aronia, huckleberry and other not so succulent plants. Also no farms in the area plant rye or cover crop rye in the fall. The following year brought in the turkeys as well as a large volume of hopping mice that I had never seen before. I called them kangaroo mice as they would hop and run in front of you as you disturbed them. They were the gazelles of the rye field jumping up to one foot high with equal distance. The grain was consumed quickly by many birds as it ripened. The turkeys made nests in it as well. I had never thought of rye as a wildlife plant but clearly it made a very positive change for many animals. It took roughly 4 years before the rye faded away completely. The last plant I found was near a roadway 5 years later. The soil had been disturbed there and the rye finished in this spot.

I actually mowed it the first year after it seeded scattering the seed in the process. That was a very dusty process. That allowed the seeds to establish again although the field was becoming perennial again. No herbicides were used and this allowed much of the original perennial species to come back again including new ones to establish. One area had a nice thistle patch reaching up to 6 foot tall which did come back but not as heavy as it once was. Wild strawberries were on the move there as well. I liked the fact that there was little planning really. It just happened. It was all done with old equipment including a disc that was sitting in the woods for the last 30 years along with a Farmall A and a 1980’s John Deere tractors.  The rye was planted with a hand held seeder slung around my shoulder that I purchased from a nearby Tractor Supply Center.  Its interesting in that when I see rye now in a field or roadside somewhere, I think of my mother and father, Christmas trees and this field of rye we created together.  You could say the rye brought us together and made it possible for me to enjoy one last hurrah with my father.  All of nature responded positively to this connection. Hurray for rye. Hur-rye. 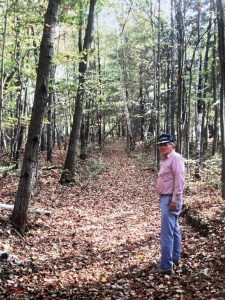