The Thicket Bean Makes a Return to Michigan

Last seen on Belle Isle, Michigan in 1896, the thicket bean established itself in the thickets of this island in the middle of the Detroit River. It was never seen again. “If native, this was surely at the northern edge of the range for this species” wrote Edward G. Voss in Michigan Flora Part 2 in 1985.  Since thicket bean pods were found in other prehistoric sites in North America it wouldn’t come as a surprise that this seed strain got its start by humans long ago and thrived under the conditions of the island.  A quick look at a map of Belle Isle today and you soon realize those conditions do not exist anymore. Belle Isle But it is possible the plant could be found elsewhere ‘wild’ in Michigan.  This species along with Strophostyles helvula , wooly bean, would have been the only choices for edible beans as annual beans were not cultivated yet. There are some selections made that contain a pod type that doesn’t twist and explode when releasing the beans. For this reason, it is thought that some prehistoric peoples cultivated this bean to some extent selecting for pods that do not have the twist and explosive seed release.

Other attributes include a hard seed coat which makes it easy to store. They are easy to harvest as the pods tend to stick out from the vine. They are tolerant to shade and use existing woody plants to grow up and over with vines that can easily grow 20 feet in a single season. The flowers are produced in large quantities on panicles of which only a portion set pods  based on the age of the plant and the size of the root system. The plant does self seed and will do so with great gusto. The pods explode as they release their beans throwing them up to 10 ft. away. You can hear them pop and crack as they dry out in my barn. Watch out for flying beans!  Hence the expression, “when beans fly” signifying the fall season is here.  Not all seedlings carry this trait though and in my planting you will find both exploding pod types mixed with non-exploding types.  Because of the hard seed coat, the beans can sit dormant in the soil for two years or more to germinate. The roots can live up to a decade or more. In my plantings, roots older than seven years will begin to die. I have yet to figure out why this happens other than attributing it to old age.  It may be the voles that terminate them at some point. I have been using garlic oil soil treatment in December and tillage around the plants to discourage this.  Voles will cause branching of the roots as they often just eat the ends of the root or come in from the side causing it to fork. This ends up creating a multi-tap rooted plant. In this way the voles may actually improve the plant and its yields keeping the roots vigorous and healthy much like pruning of a fruit tree.  Eventually the root is colonized by nitrogen fixing bacteria. I have noticed many of the older plants have the nodules but rarely on younger plants. 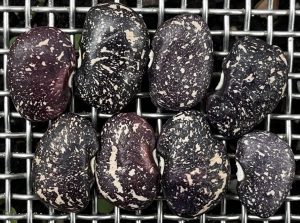 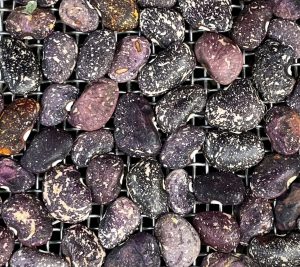 Thicket beans can be hybridized. They are related to the lima bean.  For a while, I tried to use other wild type beans like tepary beans and runner beans to make cross pollination happen via natural pollination by flies, bees and butterflies. 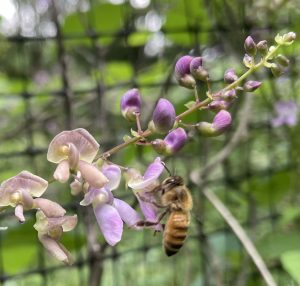 I did this by using a  ‘cloud’ pollination type of technique where I surrounded the plants with wild tepary bean selections. I do not think this was successful in crossing but in the process of doing that I found that thicket beans share many of the same characteristics as the tepary beans. I then concentrated on a heirloom lima bean called Kurzer’s Travelers Heirloom Lima from Baker Creek Seeds that also has the twirly pod characteristic. It is also from Michigan.  I used the same method and kept the lima beans for several generations over the course of 5 years or so. I also used the Christmas lima for a long time all mixed together in the planting. 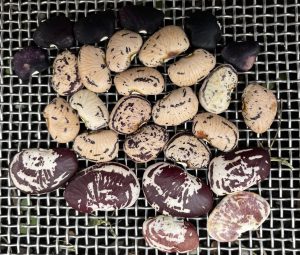 I first read about this in Eric Toensmeiers handbook of Perennial Vegetables.  Essentially you are taking a tropical plant and combining it with a temperate plant that has  been separated by thousands of years of evolution and selection.  Likely that connection is  still there to some degree and it appears to show up if given a chance. To do that, you just plant lima beans very late in the season hoping for cross pollination with the thicket beans. Try this if you can. I plant mine near the end of June or so as the flowers will open at the same time. It is fascinating to experience as the flower colors will change too from white to pink.

It only makes sense to expand the range of this plant within the realms of agriculture to create healthier humans. To me I see it as a perennial protein. But as it sits now, it is the world’s most expensive bean is safely out of reach of modern agriculture.  But given a little chance, the plant could easily be used and developed to help mitigate the changes we are seeing in the agriculture today.  It is not that hard. You could easily develop new types in one generation. The tall shade producing foliage, the deep roots filled with nitrogen fixing bacteria and heavy production of a delicious protein rich bean offers possibilities that should be explored more fully. 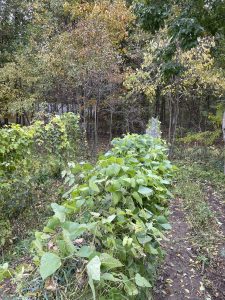 This plant can be used as is without breeding. Measuring the yields is difficult and some sort of mechanical harvesting has to be worked out as it is incredibly slow to hand harvest.  The time and energy involved along with the trellising system is off the charts compared to annual beans. Keep in mind this plant can easily grow 20 ft. tall. If your trellis only goes to 10 ft. tall then a giant mound of foliage and pods are at the top all mixed up into one giant bean ball. The last couple of years, it appeared morning doves and cardinals loved to nest in that too. It was a party in the beans. To discourage foliage eating woodchucks and deer I have to regularly apply repellants.  The foliar diseases are a problem in high humidity areas. The beans can suffer from rust which severely weakens the plant as the foliage drops prematurely. I use Serenade as a preventive for this. Overall, the species is well adapted to Michigan with the beans starting to ripen in late September and finishing in mid to late October. They do not normally all ripen at once. 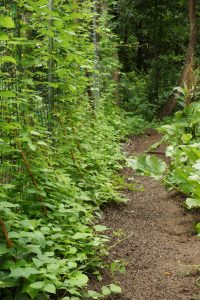 This wild bean plant is a super vigorous and healthy plant that does make you think of Jack and the Bean Stalk.  It is inspiring for me to watch this miracle of nature unfold and take root at my farm.  I view it as a universal solution and something the world needs now more than ever. Like our prehistoric brothers and sisters, a perennial protein would give us the edge we need to survive in this modern world and all its variations of climate and environment.  Will we share this treasure for all? 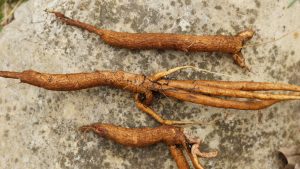 Featured in the Following Newsletter