Shining a Light on Blight: PART 2

The Story Behind the Plant:  Ralph loved the idea of a tree crop farm. Having worked in the paper industry his whole life, he purchased 30 acres of land and began planting large amounts of heartnuts, butternuts and English walnuts, all of which he purchased from Oikos Tree Crops. He planted over 10 acres of walnuts alone.  He also planted a few types of Japanese plums from another nursery that appeared to be seedlings. Despite living in a frost pocket, the consistent yields of these trees were impressive. One year the yields were far beyond what Ralph and his wife could use so he asked us if we wanted to grow the seedlings.

I agreed but had no idea what I was getting into. 5000 plants later, we had way too many but found a small but steady interest in the trees.  In the 5th year, our first planting of 25 trees contracted black knot. It was at that point I removed most of the plants. However I did find a very small number of plants, completely free of the disease, and even a few red- leafed forms. I planted those in our seed orchard. Today, thanks to Ralph I am producing my own seed, growing the plants from this new strain and sharing them with others. The original trees have long ago disappeared but Ralph lives on in my memory, along with his crazy hot pepper flake mix…but that’s a story for another time. 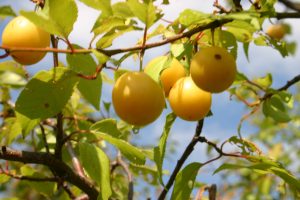 We received a call from a customer we called the chestnut guy. His idea was to test our plantings in his very cold zone 3-4  Wisconsin farm.  He wanted to try this from seed and seedlings. He purchased seeds and seedlings and sent us images of one of his amazing seed beds that were actually built into a garage!  His attention to detail made me realize, Mr. Chestnut was serious. Every now and then I would get an amazing set of images showing his progress. His discovery was not what I had expected.  It appeared winter hardiness, the ability of a tree to callus a wound and blight resistance is all connected. Eventually he decided to remove many of the trees and keep the selections that showed zero winter damage with the strongest tendency to heal after blight infection. (Or maybe even a deer rub.) The goal was not to create an American tree but to use natural hybrids to grow a vigorous and healthy tree.  He succeeded in an area where the American chestnuts only lasts 2 years and Chinese chestnuts experienced winter injury. Looking at the trees today, I marvel at their health and the abilities of Mr. Chestnut.

When I worked at a commercial nursery after college, ash trees were considered to be one of the perfect shade trees and heavily produced. There were seedless ones, purple fall foliage selections, globe-shaped crown types, and many others all widely produced by the nursery industry. They were not without their problems. It turns out that ash trees were never really selected for borer resistance. Even before the eastern ash borer, there were many types of borers that just loved to consume ash trees. I started growing the Chinese ash only because it sounded good at the time. It was a ‘mountain’ tree that could grow in rock and tolerate both dry and cold conditions.  As the seedlings grew, I pruned them upwards. The wood seemed incredibly dense as the trees matured.  We planted a few trees as an over story tree in our pawpaw patch (two story agriculture is described by J Russell Smith). When the borers came and went through our farm, these were the only ash trees left.  I may to do more pruning in the future.  Someday I’ll make a baseball bat. 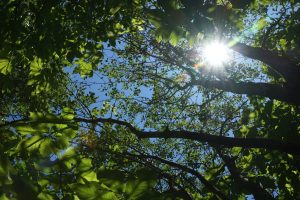 Ash trees over the pawpaw patch